My favorite part about working on R&D projects is that they tend to challenge you to think outside the box, try new things, and learn about the latest technologies.  One of our recent development projects involved injection molding a long, thin-walled tube (picture a miniature drinking straw) with a wall thickness that shrinks down to .0035” over its nearly half-inch length.  By comparison, that’s roughly the same thickness as a human hair.  Even after running dozens of Moldflow® studies for gating locations and flow analysis, the only thing we were confident of was that it was going to be a challenge to fill the parts out completely.

After struggling on our first sampling, the instinct was to look for higher flowing materials to help make the distance more manageable.  We started with a PE material with a Melt Flow Rating (MFR) around 50 g/10min and then moved on to a similar material with a MFR of 110.  We were expecting to see a noticeable improvement in the 110, but what we found was no appreciable difference on the fill.  It was determined that this was primarily due to leakage at the check ring / non-return valve, common to all traditional, reciprocating screw injection machines.

This brought us to one of the more interesting suggestions on the project.  We decided to sample the tool in one of Sodick-Plustech’s (SPT) micro injection machines.  This machine piqued our interests initially because of its two-stage (plunger-style) injection approach, but as we found is well-suited for this type of application for several reasons.

Like a traditional, reciprocating screw machine, Sodick’s two-stage injection technology (shown here) utilizes a small screw to melt and convey material.  But unlike traditional machines the screw is not responsible for injecting plastic into the mold (or any high speed lateral movements).  It feeds a second chamber, which is metered precisely, and then injected into the mold via a high-speed piston.  The feed screw shuts off after material is loaded into the chamber, which eliminates back-flow without the use of a check ring / non-return valve. 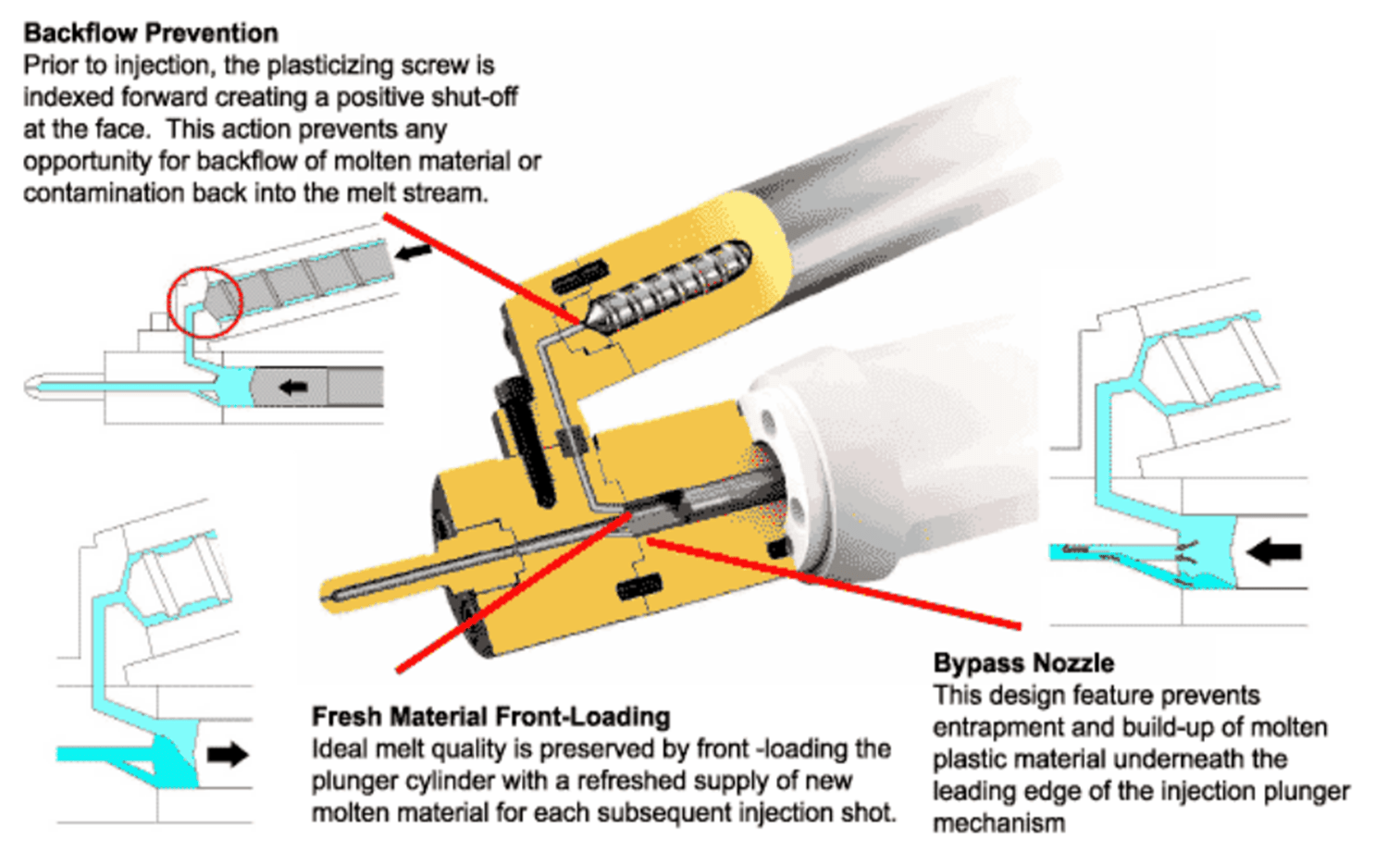 On this particular machine, the piston is capable of reaching injection speeds of 450 mm/s, which isn’t particularly impressive by today’s standards.  Many other press manufacturers tout injection speeds well past 1,000 mm/s.  Sodick, too, offers a high-speed/high-pressure line that boasts an impressive 1,500 mm/s injection speed, but their selling point is based more on acceleration than on speed alone.  The Sodick machine utilizes an accumulator that works with the main piston to reach maximum speed almost immediately upon injection.

The next selling point is the consistent shot sizes due to the tightly metered second chamber.  For our application, this is critical because an inconsistent fill could cause a short shot, which would be nearly impossible to detect with the human eye or a vision system during production.  On a project that could expand to a 16 or 32 cavity tool, this becomes increasingly critical to maintain good production parts.

Another positive about the machine is a more consistent melt and material residence time.  Again, the lack of a check ring helps by allowing for a more reliable first-in/first-out material path.  And since the feed screw isn’t creating excess heat via shear, the material is subject to more uniform heat profiles as it moves through the processing stages.

One last positive about the machine is the capability to swap out injection units (smaller or larger) and match them with differently-sized platen and tie bar configurations.  Matrix is running quite a few bioresorbable/bioabsorbable polymers lately which require minimal shot sizes due to the extremely high material costs.  However the molds associated with these projects are often complicated and require multiple side actions, slides, and/or lifters, so running them in a traditional micro-molding machine with a 4-inch max opening and similar small distances between the tie bars doesn’t always lend itself to the mold design.

Request a quote
any time day or night.
Get Started